The body of the shamisen is made up of a combination of the two parts of the SAO (rod) and the DO (torso). The material of the SAO is made of Karin (Padoauk) , Shitan (Rosewood) , Kouki (Redsander Wood) , African Koki(※ Oak , White Red Tree etc even befor it was maed) . Several materials are used, but all the DO is now made of Karin. The type of SAO was often used depending on the skill of the player, but now it is common to recognize the difference in grade simply. Karin ‘s SAO is the cheapest, it is a material that is easy to purchase as an introductory one, but because it is soft, it is a weak point that it is easier to reduce where you hold down with your fingers (Kanberi).

There is also a view that there is a feeling that the sound sounds in the near field and it is not suitable for performance on a wide stage. Shitan is just like the middle, it is more durable than Karin, but the ringing is said to be inferior to the Kouki. Recently it has been sold as a thing which raised durability by pasting the thin plate of this Shitan to the pill of Karin. Kouki are currently considered to be the finest materials, heavy things are regarded as the best. There is also a unique pattern called Tochi, which is considered high-class in the decorative sense. African Kouki appeared as a substitute for Kouki which became difficult to obtain now. It looks like Kouki very much, but it is somewhat brighter red, hardness is not on Kouki. 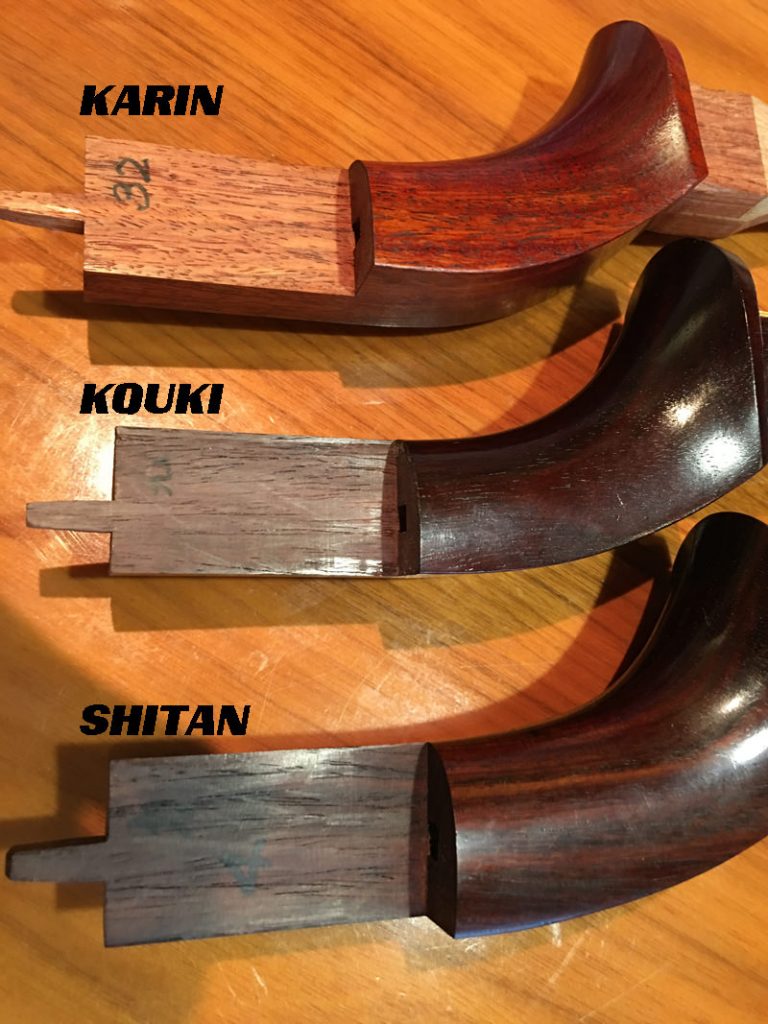 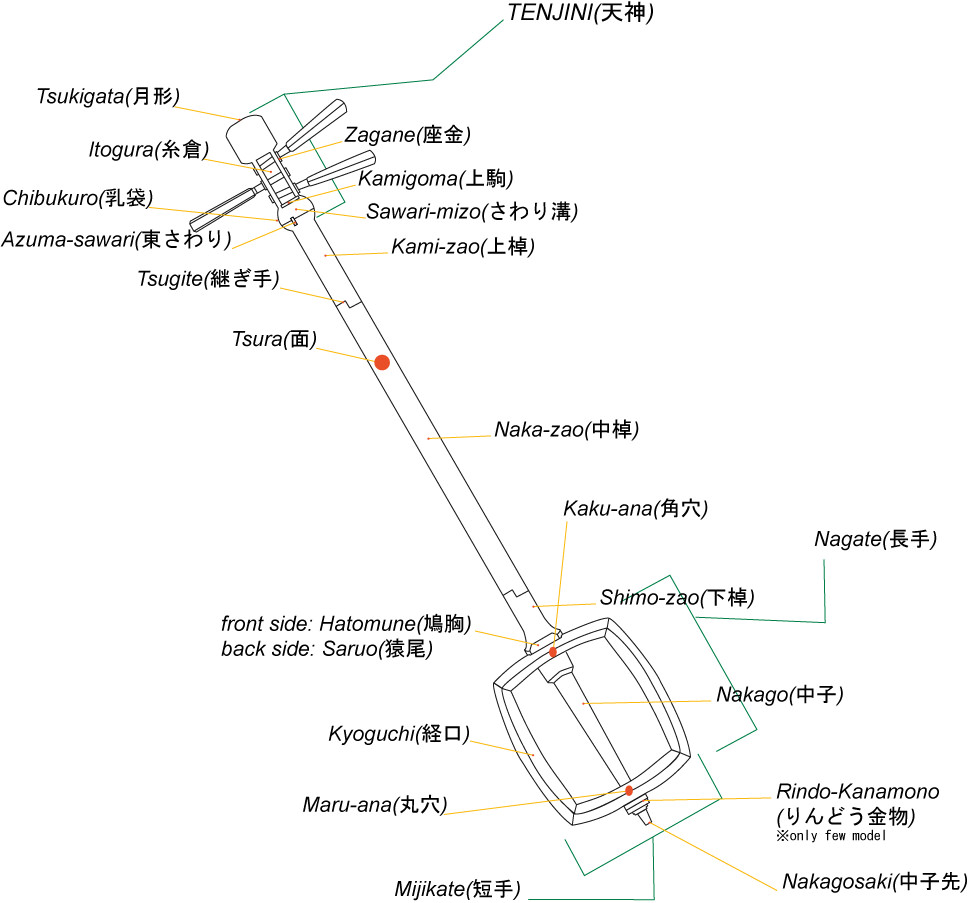 It is a common product that you can disassemble SAO into three, called “Mitsuori”. The upper pole is the Kamizao The part with the Itomaki attached to upper Kamizao is called Tenjin , the middle pole is the Nakazao, the lower pole is called the Shimozao. The Nakago is connected to the tip of the Shimozao and enters into the DO, and the part coming out from the DO further is called the Nakagasaki. Also, there are rods that can not be disassembled, and this is called “NOBE-SAO”. Although there is an opinion that originally it is better to have a crazy bow SAO, all the luxury goods are “MITSUORI”. The way to count the shamisen is the same as the pistol counts as ICHO (one) or NICHO (two)

The parts connecting the SAO are called TSUGITE , and when we break it apart we call KARITSUGI that we wear and protect with this joint. In second – hand goods, there are many things that are not attached because KARITSUGI was discarded. 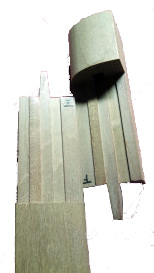 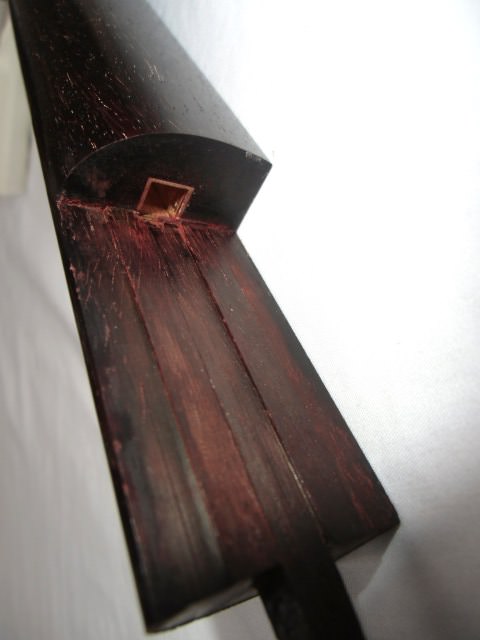 Karitsugi is not something that can be used for anything, it is manufactured as a snug fitting on the shamisen when making a shamisen. You can not use it even if you brought another.

One of the pronouns of expensive shamisen is what is called Kinboso (gold plate). It is called so because pure gold or alloy is contained in the hole of “joint”. When gold pure is usually used for joints, there are cases where the KAMIGOMA (top KOMA) and Fukurin (base plate for ITOMAKI ), those with AZUMA-SAWARI are partly golden. Sometimes it is said that sounds sound well, but there are opinions that it is hard to imagine that it works greatly. However, it is imagined that often the shamisen which these parts are used sounding well often results in many rigid and heavy rods, and often uses well-sounding materials. The rod of KOUKI which metal is not used for this joint is called NAMI-KOUKI (standard). In the case of silver rather than gold, it is called Ginboso (silver plate).

Next, there are several kinds of processing of the part of the “TSUGITE (joint)” skin (the part where the rod and the bar grip each other). If there is flat called “HIRAMIZO (flat grooves) ” If there is a single road processing “IPON-MIZO ”, if there are two, “NIHON-MIZO ” and “DANTHIGAI-MIZO “we call. The more expensive Shamisen is working with labor. Of course, the other grooves than the flat groove are easier to connect because there is no deviation.

Genres are divided to some extent depending on the thickness and length of the pole. Let’s start with thickness. When searching for a shamisen, I definitely think that you will see the notation of thin rods (Hoso-zao), middle pillars (Chu-zao), thick bowls (Futo-zao). It seems that you can find the connecting part with the Tenjin of the upper pillar, where you can find the part of the human body that bulges to the left and right as if the human cheeked from the front, but this part is called a milk bag (chibukuro) It’s called. It is called the part (face) which is the plane of the pole at the position under this milk bag, but this width is measured and divided by its size.

In the genre of the shamisen, the thickness and length of the rod are determined to a certain extent. Let’s start with thickness. When looking for a shamisen to purchase, you will notice that the notation of HOSO-ZAO (細棹), CHU-ZAO (中棹) or FUTO-ZAO (

太棹) is written about the thickness of the SAO. It is necessary to determine the size of a place to decide it. You can find the connecting part with Tenjin in the KAMI-ZAO, where you looking from the front, you can find a part that sticks out roundly as human beings have inflated the cheeks. This part is called a CHIBUKURO (milk bag). We measure the width of the flat part under this CHIBUKURO.

The type of SAO is divided by its dimensions (this is called THURA-HABA(面幅)), the approximate standard is as follows.

This will be a comparison of the dimensions of only the face width, so you will think that there is less difference than you expected. However, since the HRI-HABA(張幅) and the KASANE-HABA also become thick, you should be able to realize that the thickness is quite different when you actually have it.

The total length of the shamisen is about 3 shaku(尺) 2 sun(寸) (around 100 cm), and what is said to be the correct size from the tip of Tenjin to the tip of the Nakagosaki is 98 cm or more. Tsugaru shamisen is mostly long, especially the length is 100 cm or more. There are other short lengths which are called TAN-ZAO (short rods). This is sometimes used for folk songs of Kyushu area, or when matching the Key for height of female voice, and sometimes for children. There is 1 suun-zume (1寸詰め：3cm short) 1 suun 5 bu zume (1寸５分詰め) and so on.

One of the viewpoints of the difference in the SAO is the shape of the HATOMUNE (dove chest). The NAGAUTA Shamisen (HOSO-ZAO) and the CHU-ZAO for Joururi Act, and the GIDAYUU Shamisen (FUTO-ZAO) have the HATOMUNE that draws a gentle slope. The JIUTA Shamisen (CHU-ZAO) and Tsugaru shamisen (FUTO-ZAO) extended to the vicinity of the DO (so as to make it easier to hold high attention) making it a square shape of HATOMUNE. Shamisen with the AZUMA-SAWARI (can adjust the touching height) in the CHIBUKURO will be a Chu-zao Shamisen such as Jyoruri and Tsugaru Shamisen. In addition, as a special mechanism, there is also GIDAYU Shamisen and one of the Jiuta Yanagawa Shamisen, with the beginnings position of NAKAGO and NAKAGO-SAKI sandwiching Kyougi (trees paper) and changing the height of “Ha”.

Although the height of “Ha” is set properly when it is brand new, it will go crazy while re-placing the leather or modifying the reduction of the SAO many times. If the height of “Ha” becomes too high, sound will be blocked or it will be difficult to play, so you will need to modify it. 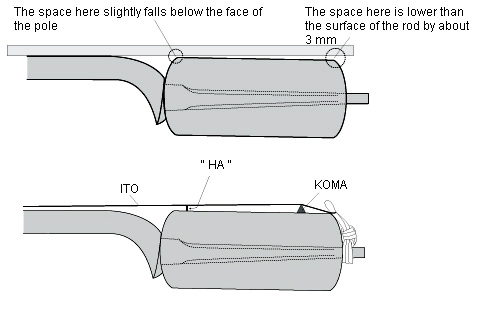 Although it is about the torso at the end, although speaking of the pronoun of a high class shamisen will be called Ayasugi DO, this processing is also costly, so it is not adopted for anything other than expensive shamisen. This is originally applied to the processing of Japanese drums, it is a process to make a sound echo and improve the sounding. However, none of the actual effects are clearly understood, and due to the characteristics of the shamisen that each is a handicraft item and the same thing does not exist, it is impossible to strictly compare. However, because there are some individuals that sound well even in the unprocessed DO (Maruuthi DO), it can be said that the meaning of proof of high class shamisen is stronger than rather good sound.

Good and bad on the DO is said to have good “KIAJI (wood taste)”, and it is said that things with annual rings getting out round on the board are good.

Regarding the size representation of the DO, it becomes the notation of how big mm is based on the Nagauta shamisen’s DO. It is said that the size of Gorindai (5厘大) is about 1.5 ｍm larger in front, back, left and right with respect to the body of the Nagauta Shamisen. Approximate size is 2 bu dai (2分大) in the Jiuta, from 3 bu to 4 bu dai in Gidayu Shamisen, 4 bu to 5 bu dai Tsugaru shamisen in size. 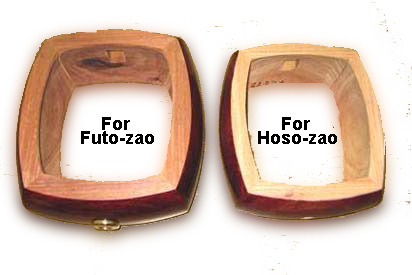 It is the skin affixed to the torso, but the real animal skin is used. The Hoso-zao such as Nagauta is a bisect of the skin of the cat and is called “YOTSU (four)” because four traces of the nipple are visible. The skin is thin and easy to break, but it is suitable for delivering delicate sounds. Even Tsugaru shamisen and other shamisen are recently used as dog skin called “KENPI (犬皮)”. It is suitable for producing thick and heavy sounds. In addition, the Yanagawa Shamisen uses the kitty skin one by one on each side so use what you can see the traces of nipples. The sound varies greatly depending on the thickness of the skin and the strength of pulling the skin when sticking. The production method of using this leather has become a part regarded as a problem from the standpoint of animal protection in Western countries. Although there is a concept of preserving traditional arts, each shamisen maker is currently in a hurry to develop synthetic leather. Until now, the difference between the sounds of this skin and synthetic skin has been intensely used, and it has been said that it is difficult to use in the stage, but recently it is finally found that a synthetic leather that can produce sound close to the real skin is born, It is thought that it is possible to reduce opportunities to point out problems.

That concludes the explanation of “Shikomigara (basement of shamisen body)” which becomes the basis of the shamisen. In addition to this “ITO (糸)”, “ITOMAKI (糸巻き) 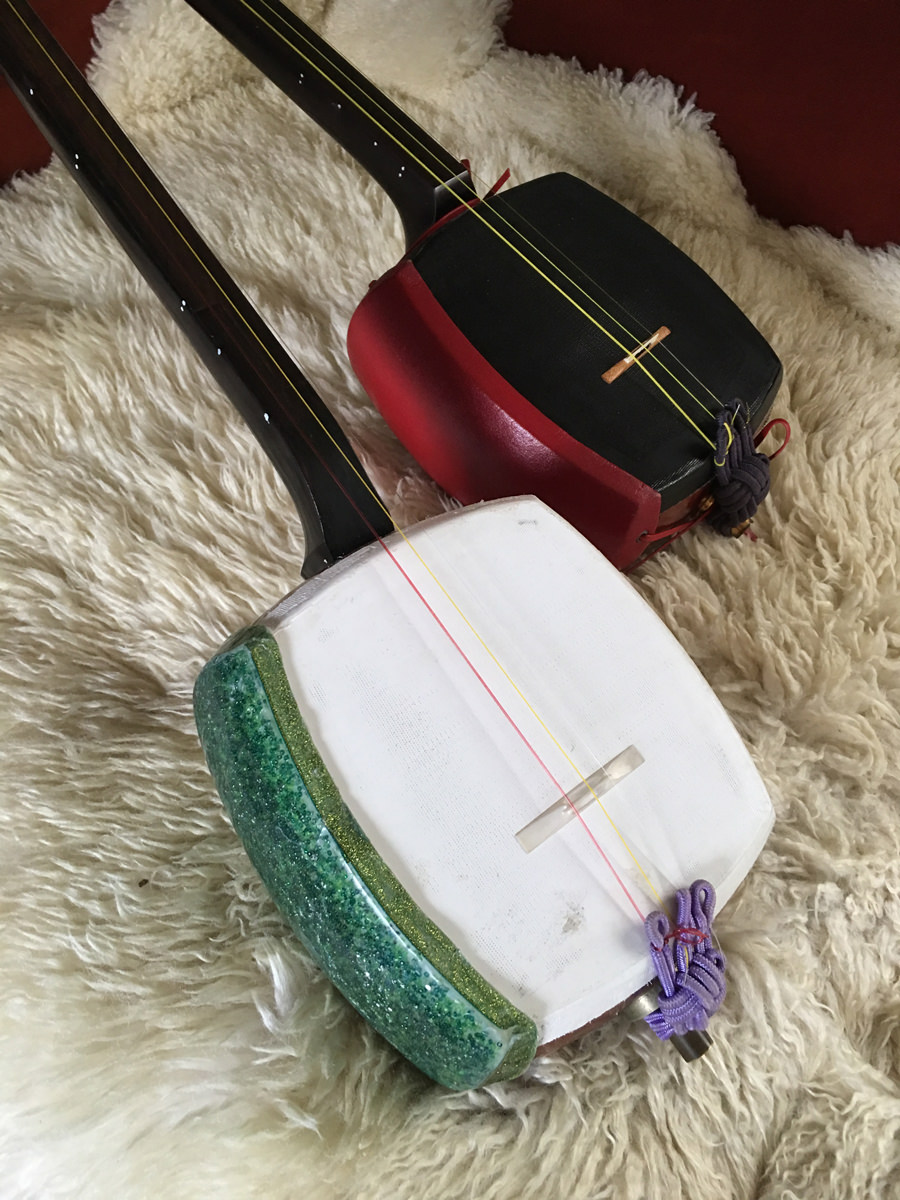 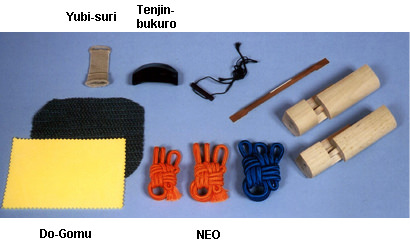 The royalty free riffs listed here are free to use in your project.